Does point cloud registration really work in the cloud?

We explore the practicalities of registering point clouds in the cloud including the benefits, advantages and future of point cloud processing in the cloud

The cloud offers secure remote access for project members, supports in-the-field registration, reduces pressure on the quality of your devices, provides dynamic scalability, and delivers super-fast registration using multi-thread execution and parallel processing. What you do need to make this work is the right point cloud registration software and the right investment in bandwidth.

Producing accurate and complete 3D point clouds usually requires multiple scans. The result of a multi-scan survey process is dozens, if not hundreds or thousands, of independent scans. In order to produce an accurate point cloud compilation that covers the entire area, you must stitch together the individual scans with the same level of precision that each scan possesses independently.

In order to achieve this, a ‘registration’ process is required. This is where the entire point cloud generation process traditionally slows to a crawl due to the limitations of current software. Traditional software used for targetless registration requires regular manual inputs, demanding constant professional supervision. 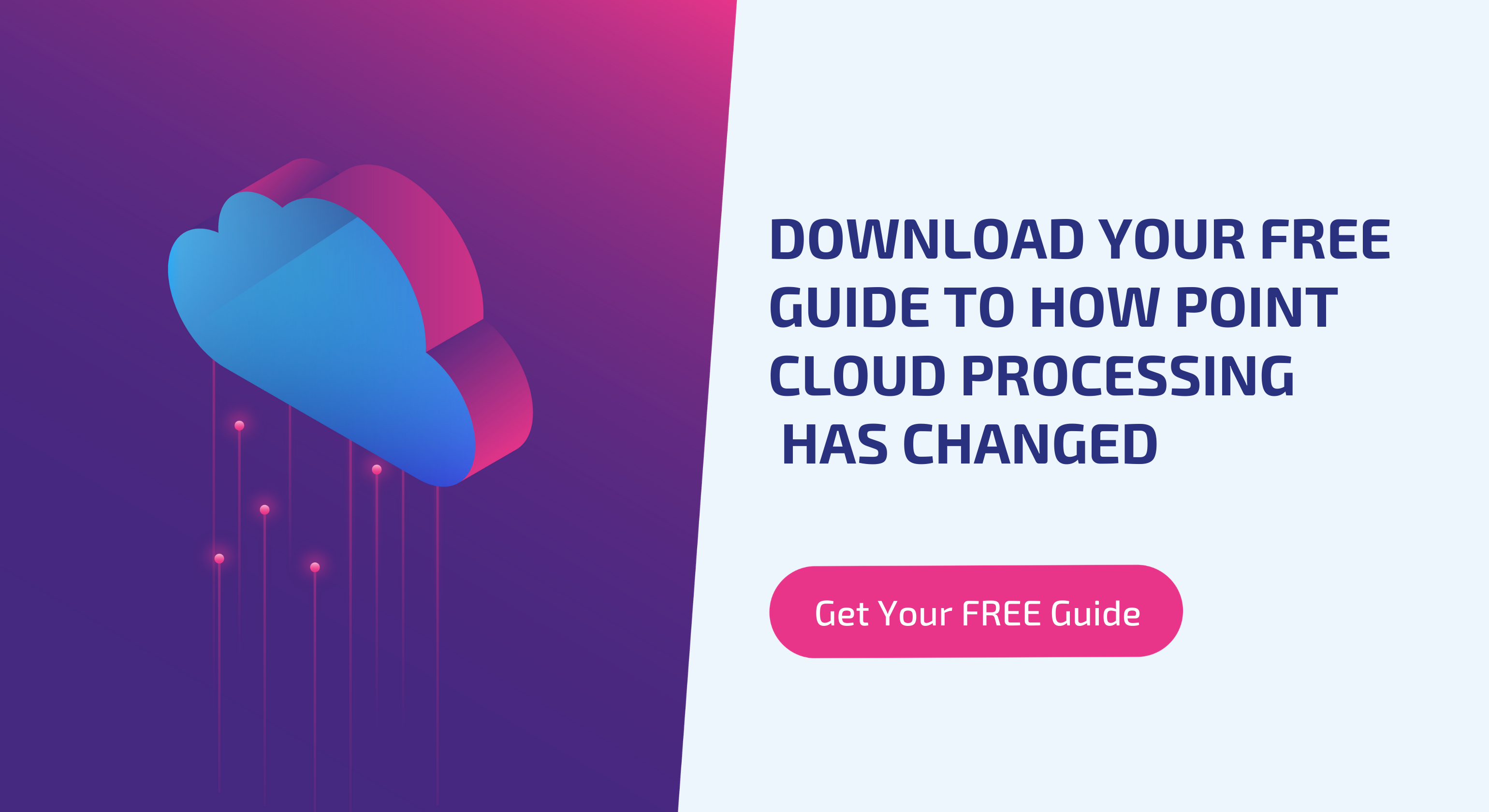 Advances in point cloud processing, especially when linked to the cloud, have created robust solutions that can deliver significant reductions in the time and cost targetless point cloud registration. Primarily, point cloud creators now have the ability to process scans for on-the-fly analysis and alignment as a result of this automation.

There is no longer a need to weigh time saved in the field against time spent processing in the office. In fact, the speed of processing has created the possibility of onsite registration and alignment of targetless scans. For example, one floor of a concrete building core, needing 16 scans can be processed in 10 mins using the right registration software in the cloud.

New techniques in vector-based spherical alignment and 2D point density calculations have reduced the total time taken to align scans. Most large-scale projects will receive a 40%-70% improvement in alignment processing speed. Combined with cloud-based automation, this not only means that point cloud creators can run scans in the cloud for unsupervised alignments, with many projects finished the same day.

Some point cloud processing software allows you to register multiple scans simultaneously during segments of the registration procedure, each taking up one thread within a CPU core. A few programs allow you to take advantage of this multi-tasking throughout the entire procedure.

Amazon EC2 instances support multithreading, which enables multiple threads to run concurrently on a single CPU core. Each thread is represented as a virtual CPU (vCPU) on the instance. An instance has a default number of CPU cores, which varies according to instance type. For example, an m5.xlarge instance type has two CPU cores and two threads per core by default—four vCPUs in total. The advantage of cloud is that you can deploy as many of these instances when you need them and close them down when you don’t.

When you combine 5G with cloud computing and storage, it enables the vast amounts of data generated through LiDAR scans and point clouds to be processed on individual units in the field — with data uploaded to cloud services to be registered in near real-time.

The maturity of laser scanner tech has opened the door to third-parties creating their own software, leading to rapid advances in capability. Chief among these is vector-based, multistage processing.  Creating stable coarse registration without needing manual oversight leads to the full exploitation of parallelization — which allows scaling in the cloud to rapidly accelerate large projects. This means less time staging a scan, less time extrapolating the data, yet still yielding reliable and accurate results

This freedom and flexibility can make a significant difference to the overall efficiency of how you work. A 65% majority of respondents to an InformationWeek survey said “the ability to quickly meet business demands” was one of the most important reasons they moved to a cloud environment.

Cloud technology is not new — AWS was around from 2002 and was officially launched in March 2006, 14 years ago — a year before the first iPhone. Whether it’s technology giants, television networks, banks, food manufacturers or governments, many different organisations are using AWS to develop, deploy and host applications and there are many also using Microsoft Azure, Google cloud and IBM cloud.

So, is there any question of the cloud being a stable platform? The major issue is one relating to outages. No cloud service is available 100% of the time — they still have availability stats that most companies could only dream of — but they are not infallible.

Downtime can be a short-term phenomenon, and your services will be back online quickly. However, if you lose data, then it is practically impossible to recover that data. So, strategies are needed to ensure your data is backed up separately rather than depending on just one cloud provider.

When considering network access, 5G looks to have most bases covered. High reliability is one of the key design specifications for 5G with 99.999% uptime and latency of less than 1 millisecond. Loss of connection for critical services such as connected robotic factories, remote surgery and driverless cars could be life threatening.  The 5G architecture has been designed to be highly available with redundancy integrated into every component — reassuring if you are using cloud service on-site.

Assembling the numerous point clouds recorded on site can be a daunting prospect. Accurate scanning results in large file sizes, all of which require aligning, Cloud solutions allow for much easier compiling of project data — rather than physically transferring and combining files on workstations, the data is loaded individually from site to the cloud for automated processing. Once the data is processed — it can then be shared from the same cloud location.

Let’s say you’ve got 10 users in an office and you’ve got a point cloud file that you want to distribute among those CAD users. You may previously have gone down the route of splitting the file into multiple smaller files and sharing them around to different people. You may have shared the same database to everyone and then you’ve created versioning issues

By having one central data repository, not only can data be stored, and version controlled, it can also be accessed by other programs further down the process for viewing or documentation.

The agility and flexibility of rapid point cloud registration in the cloud gives a massive advantage over competitors and substantially improves the effectiveness of how you work. But most of all, the adoption of cloud future-proofs your business from the vast changes that are happening in the construction industry, Point cloud registration does really work in the cloud and will be a key central platform for surveying in the future. 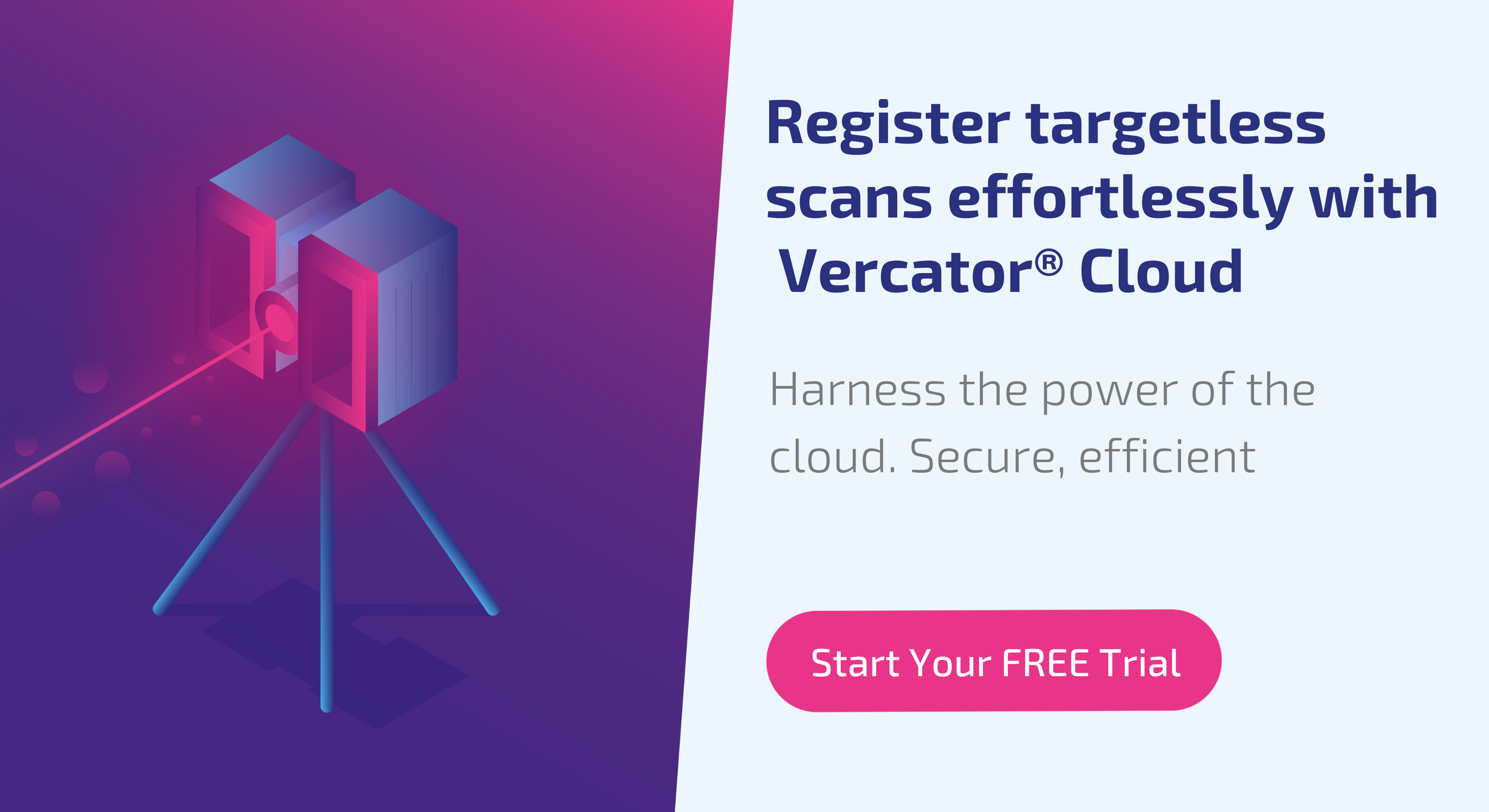 The Vercator Roadmap - Where We Started and Where We are Going