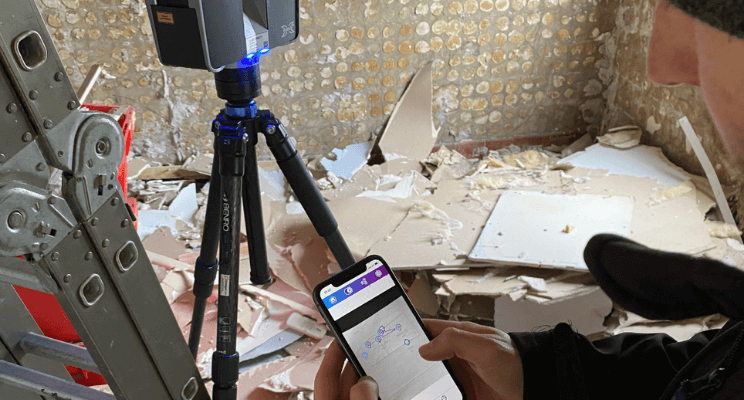 Using Vercator, Omega was able to conduct their registration entirely on the cloud. We go into depth about how they achieved this in a case study.

Omega Geomatics is a well-regarded building & land surveying organisation. With over 30 years of experience in the Geomatics industry, the company is no stranger to riding the waves of innovation and embracing the latest and most remarkable digital solutions.

One area that has rapidly evolved over the last few years is Terrestrial Laser Scanning. Spurred forward by the rise of cloud computing and mobile working, today’s advanced scanning packages offer real-time, cloud-based processing and intelligent sensors to enhance the accuracy of scan placements.

In 2021, aware that their Faro X-series laser scanners were becoming slightly outdated, OmegaGeo considered procuring new scanning equipment. However, the expense of doing so led them to look down another avenue: could they find new cost efficiencies and enhance the life of their existing fleet by investing in new software?

With this goal in mind, the team embarked on an R&D project. They wanted to find out if an intelligent software implementation could improve their team’s productivity while also enabling cost savings that could then be redirected into other areas of the business.

At the time, the workflow for the Faro X-series scanners involved several manual-laden steps. Surveyors would use the scanner from various positions to build a complete picture, and then register the scans either on an on-site laptop or desktop computer at the company headquarters.

This was a lengthy process. A simple registration for a small house, consisting of roughly 40 scans, would take about 1.5 hours. Usually, this workload would be split over several days, as surveyors juggle many projects at once.

Keen to improve efficiency, Omega began reaching out to registration service software providers. After assessing a few players within the market, the team settled on Correvate's Vercator, feeling that it best suited their use case.

As a next step, OmegaGeo wanted to evaluate Vercator’s performance and ensure the software was a good match for its fleet. Working with Vercator’s team, they embarked on a pilot initiative, where they scanned a live housing project.

“We picked a 4-bed detached house as the test project. In the interest of transparency, I consulted with the client to see if they would mind me using a live project as a test. My reason for this was that there was a risk of delays to the client if the project did not go according to plan,” explained Brett Duffield, Director, Omega Geomatics.

“The client did not have any concerns as to delays. However, they did enquire if the accuracy would be to the same level of detail they normally received,” He continued. “I was able to remove any concerns as I had a contingency plan to undertake the survey in a method which would allow me to use our existing software as a benchmark for data comparison. By doing this, it would be able to prove some of the processes in Vercator were producing the correct results.”

The pilot was a raging success. Armed with Vercator Cloud, the team halved their time in Faro Scene, giving valuable hours back to their employees.

To learn more about the pilot, scroll to the bottom of this page for Brett’s full account of testing Vercator.

Out with the old and in with Vercator Cloud

Vercator had several features that appealed to OmegaGeo from the offset. Most prominently, Vercator’s scalable and flexible cloud computing platform offered a competitive edge.

Previously, the registration process at Omega was clunky and inefficient. It involved an office-based Top View registration for a cluster of scans, followed separately by a cloud-to-cloud registration. This method was vulnerable to errors on the software side — especially in instances where structures were complex or repetitive.

As a result, OmegaGeo’s surveyors had to spend a lot of time manually reviewing registrations to ensure that scans were in the correct place. This time-intensive, repetitive process often stole surveyors’ time away from higher-value, more meaningful work.

By contrast, Vercator’s software supercharged the registration process. Based entirely in the cloud and supported by an intuitive mobile app, Vercator empowered OmegaGeo’s surveyors to undertake on-site registration seamlessly and accurately.

A surveyor can place and link numerous scans together instantaneously within the app — all while on site. By connecting scans, the surveyor can easily review the registration network to ensure accuracy. The algorithm underpinning Vercator’s software automatically aligns the various data points for precise, quantifiable results.

Off the back of the successful pilot, Omega rolled out Vercator’s software across its existing scanners, enabling them to save a wealth of costs that would have otherwise been spent on upgrading to newer models.

As Brett notes, “The time saving on this project’s office time was around 83%. This was a significant productivity saving, and after several supervised tests the software is now in full use after sustained results.”

“As a minimum, we previously had 1.5 days a week of processing that the three scanning teams would create, which is no longer required as the teams are able to process on the same day. This equates to a significant saving in fees per week while allowing us to take on more work.”

The Vercator Cloud enhances the speed and accuracy of the registration process, so your team can perform more work in less time — while enhancing precision.

Here is what the process looks like in practice:

Working on a Band D Measuring Building Survey, it was critical that Brett’s team quickly produce scans without going beyond a +/- 15mm global accuracy tolerance. What Brett wanted was to reduce office-based processing time, and that required doing more in the field.

“Whilst scanning at 1/4 resolution the Surveyor normally has just over 4 minutes of 'down time'. It is not practical to undertake complex tasks in this time, there is a security and risk to the public whilst this the scan is taking place.” But with a simple cloud-based solution, the surveyor could do the linking network whilst scanning. “This proved to be a very simple task and had no effect onsite time, even on the indoor scans which are just over 2 minutes.”

Overall, the outcome was a massive increase in efficiency and speed, all while retaining the accuracy required to deliver against project requirements. But you don’t have to take Brett’s word for it, you can try Vercator yourself, today.

Find out more about Vercator by booking a call with us. Let’s chat about how we can improve your workflow.

How cloud-based registration could help you boost productivity by 80%