What are the most popular types of point cloud processing software? 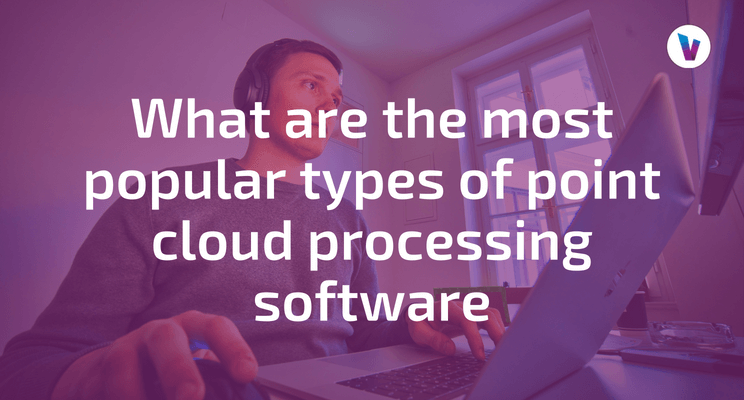 This is a guide to help surveyors, engineers and other point cloud creators get the most out of their software purchases. Picking the​ right point cloud processing software is the first proprietary decision they need to make.

Point clouds start off as datasets that are broadly incomprehensible for most practical purposes. Point cloud surveys generally result in dozens, if not hundreds or thousands of scans that need to be ‘registered’ and aligned in order to produce an end product. That composite data set then often needs to be visualised using 3D modelling software.

For those also in the market for surveying equipment, it is important to buy software that will complement chosen hardware. For those looking to avoid dedicated scanner purchases, versatility and interoperability are important concerns. Although there are similarities across the available software, there are enough variations that it is important to look carefully at the options before making a decision. This is a guide to help surveyors, engineers and other point cloud creators get the most out of their software purchases.

Autodesk is the behemoth of point cloud processing and reality capture software. The company has an annual revenue of over $2 billion. Founded in 1982, the American firm burst into the market with AutoCAD, which remains its flagship computer-aided design (CAD) software.

Focused on delivering IT services to architecture, engineering and construction (AEC), Autodesk products are also used in manufacturing, media and entertainment. The company is one of the few players in this space that does not produce in-house hardware and is solely focused on hardware agnostic software systems.

Revit is Autodesk’s primary program for 3D models for BIM (Building Information Modelling), it allows users to manipulate whole buildings or assemblies within a project environment. This program is considered an industry leader when it comes to BIM dedicated software. However, it is incapable of NURBS modelling.

Recap is targeted at Autodesk's media clients, but offers powerful reality capture capabilities for 3D and 2D modelling that have found applications in a wide range of industries — particularly construction designs based on point cloud scans of existing structures.

Autodesk software has a reputation for high-standards, intuitive interfaces and efficient workflows — setting the industry standard for decades. They are optimised for use with proprietary file formats (RCS/RCP for ReCap and DXF/DWG for Revit ). However, as one of the most widely used software suites in the industry, interoperability issues are minimised and export to more common file formats is possible. The different programs within Autodesk’s suite complement each other with different specialised capabilities.

Despite their many benefits, Autodesk programs are expensive. Autodesk also continues to tweak internal file formats, creating some interoperability issues between different versions of the software. Although ReCap and Revit can be used in a complementary way for construction projects, their basis in different proprietary file formats can cause complications. Each, however, is considered an industry leader in its own right.

Bentley Systems has specialised in servicing architecture, engineering and construction (AEC) operations since its founding in 1984. The American software firm has a revenue of over $625 million, making it a large and dedicated player in point cloud processing and engineering IT services.

Bentley, like Autodesk, is focused solely on software production — opting to create versatile systems capable of interfacing with a number of hardware provisions. Bentley acquired Pointools Ltd in 2011, expanding their existing point cloud capabilities from their long-standing Descartes system.

Pointools offers a powerful and fast point cloud visualisation and editing platform. Pointools has retained a flexible design for years, offering its users a uniform yet customisable experience that has continued to deliver across system updates. Known for consistency, Pointools provides active saving and referencing capabilities within a range of tools that cover most drafting needs.

Pointools is used widely within the civil engineering space. However, the number of options available in the layout can also be overwhelming to untrained users, particularly when it comes to modify tools such as trimming, extending, fillet and chamfer.

Leica Geosystems brands itself as the premium provider of point cloud processing and survey equipment. They develop both hardware and software intended to take their customers on an in-house and intuitive journey from the field through to processed 3D models. Leica also operates several partnership programs. They are a privately held subsidiary of the Swedish firm Hexagon AB and have an annual revenue in excess of $800 million.

Most Leica hardware is designed to interface solely with Leica software, using proprietary file formats and encryption. Their point cloud processing software, however, has been developed with more open source aims — accommodating a wide range of input and export formats capable of interfacing with third-party technology.

Leica’s flagship point cloud processing software ‘Cyclone’ offers a diverse and fast operating system with auto alignment tools and user-friendly cloud-to-cloud registration abilities. Beyond processing, Cyclone offers linework capabilities that allow files to be imported directly to CAD software in a nearly finished capacity. Leica products, however, are expensive. Although Cyclone has 3D modelling capabilities, it is intended to be used in conjunction with dedicated modelling software.

Faro is a producer of both scanners and processing software. Founded in 1981, the American company has an annual revenue of over $360 million and is an industry leader in 3D measurements, imaging and realisation technology. Although a significant player in both the surveying and processing software markets, a large number of Faro’s customers are advanced machine manufacturers. Many of their scanners are focused on delivering precise models of objects, rather than surveying. Faro’s surveying scanners are considered a faster, smaller and cheaper alternative to Leica products, but at the cost of accuracy.

Faro’s processing software, Scene, is designed to interface with their own hardware and third-party scanners. It is capable of generating high-quality, full-colour data quickly for registration using artificial targets and cloud-to-cloud comparisons. Scene is purpose-built to interface with virtual reality (VR) technology and can connect with cloud services hosted by Faro — providing some 3D modelling capabilities and easy file sharing access. The software is fast and known for easy registration processes, but offers fewer features for cleanup than Autodesk and Leica products.

Riegl is better known for hardware than processing software. For high-end, long-range scanners, Riegl products are hard to beat. They dominate the airborne market, and are used heavily in the mining sector. However, Riegl also offers their own in-house software that interfaces natively with their hardware products.

RiSCAN Pro pairs with terrestrial laser scanners, delivering batch registration, 3D bundle adjustments and filtering tools. Data is streamed in real-time from the scanner to the software. RiSCAN is a great system for use with Riegl scanners, however has a smaller market presence when used with third-party hardware. RiSCAN offers basic visualization features, but fewer modelling capabilities than other popular point cloud processing software.

Trimble is an American leader when it comes to both point cloud processing software and hardware production. Founded in 1978, they have an annual revenue stream nearing $3 billion. Trimble develops laser rangefinders, UAVs, inertial navigation systems and GNSS receivers. Their technology has a reputation for being fast, clean and consistent.

RealWorks is Trimble’s flagship point cloud processing software, designed to flexibly register and analyse point clouds. It allows users to register, cleanup, model and develop finalised deliverables in a single program. RealWorks is expensive, but delivers a wide range of features, including 3D modelling capabilities. Each stage, however, has fewer options than purpose-built 3D modelling software, or BIM programs.

Trimble Edgewise is their BIM specific software, designed to be used in tandem with RealWorks. Trimble also produces a CAD only program called Trimble Business Center.

The Future of Point Cloud Processing and 3D Models

Technology always changes. One of the ongoing debates within the point cloud community is the need to package all processing and modelling components within the same program. Many new entrants into the market focus on a single aspect of point cloud creation, delivering improvements to either the processing or modelling. This type of focus allows for faster innovation and often better, yet singular, products.

This is seen within the larger software producers as well. BIM specific modelling programs, for example, rarely come with processing capabilities — the dedication needed for BIM requires specialisation. The same logic holds true for processing and 3D modelling. For example, several new processing programs are taking advantage of machine learning and novel rotational vector techniques to accelerate the processing registration procedure by as much as 40%-90%.

Other startups are making new 3D modelling and CAD programs for use in conjunction with ‘processing only’ software — making intuitive changes to controls and export capabilities. This type of innovation is not possible when looking to rework the entire development process in one go. Point cloud developers that embrace this multi-stage process are often able to produce higher-quality output at speed, compiling the best of breed capabilities for each stage of the development journey.