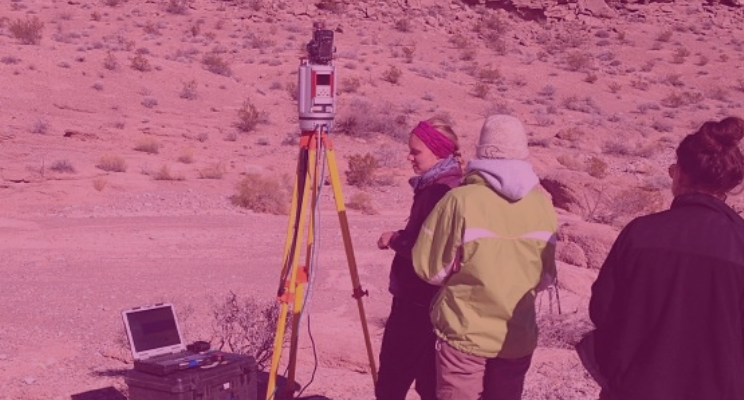 What is LiDAR? How does LiDAR work? We explain how LiDAR works and the process involved in taking raw scan data and turning it into something of value.

What is LiDAR? How does LiDAR work? If you’re new to the subject, or just want to know how the scanners you rely on actually work, you have come to the right place.

Light Detection and Ranging (LiDAR) is a time-of-flight measurement technique that deploys lasers to gauge precise distances, very similar to its better-known cousin RADAR. LiDAR was one of the first applications of lasers after their invention in the 1960s. The first attempts were airborne, using planes as the platform for the laser beam.

It wasn’t until the arrival of GPS and inertial measurement units (IMUs) in the late 1980s that terrestrial LiDAR began to emerge. Today, LiDAR technology and techniques can be deployed to collect measurements that are used to create 3D models and maps of objects and environments.

Here, we are going to explain how LiDAR works and the process involved in taking raw scan data and turning it into something of value. By diving into some technological advancements impacting LiDAR, our goal is to improve your access to this evolving technology. But first, we need to explain a few more basics.

What can LiDAR measure?

Using ultraviolet, visible or near-infrared light, LiDAR maps spatial relationships and shapes by measuring the time it takes for signals to bounce off objects and return to the scanner. A good analogy is the echolocation used by bats to determine where objects are and how far away.

LiDAR can target a wide range of materials, including non-metallic objects, rocks, rain, chemical compounds, aerosols, clouds and even single molecules. A narrow laser beam can map physical features with very high resolutions — for example, an aircraft can map terrain at 30cm (12 in) resolution or better.

LiDAR scanners (often also known as Laser Scanners) can capture detailed measurements for entire rooms, buildings or even cites by using multiple scans. Each individual scan is made up of millions of individual measurements. But each scan is line-of-sight, so many scans are potentially needed to provide a complete 3D view of on object.

Understanding the process of aligning the many scans required to gain scene coverage is key to understanding LiDAR and everything that goes into turning laser scans into a workable 3D model or virtual reality visualisation. Once individual readings are processed and organised, LiDAR data becomes point cloud data.

Building a point cloud: one co-ordinate at a time

There are different ways to collect data using LiDAR: from the ground, ariel and from satellite (altimeters not scanners). There are also three types of LiDAR: topographic mapping the land, bathymetric using green light to measure underwater, and terrestrial for mapping buildings, objects and natural features. So let’s take a terrestrial LiDAR scanner as our example to see how it works.

Terrestrial LiDAR usually involves a laser scanner mounted on a tripod . Terrestrial LiDAR instruments are very accurate, averaging around +/- 3mm per scan point for static scanning. There are numerous terrestrial LiDAR systems on the market, each with their own advantages and disadvantages.

Terrestrial laser scanners can broadly be defined as phase based or time of flight. Phase based scanners work by measuring the change of phase of the laser light. The advantage of this technology is the significant speed increase of data capture (over a million points per second).

Time-of-flight scanners emit light (in a pulse or stream) which measures the amount of time it takes to travel from the scanner to the object and back, allowing the scanner to calculate the distance. The advantage of this is that data can be captured at much longer distances than phase solutions.

Sensors scan from side to side over a given range and field of view with a laser beam. They transmit light and the sensor has a detector which senses the return from objects. Basically, they record the time it takes, divide by two, and multiply by the speed of light to get the distance.

LiDAR-based surveys can generate very large data sets made up of billions of points of data. To work with LiDAR and laser scan data, specialist software is needed.

Scan registration: from one scan to total coverage

To turn multiple scans into a single, complete picture of a scene, each needs to be aligned with every scan surrounding it. This process of scan alignment is called ‘registration’. It is a computer aided process carried out in one of three main ways: using location data, using targets and using natural features.

Knowing the precise location of a scanner is essential to producing a usable dataset about an environment. Each individual scan contains millimetre accurate measurements. For the final composite point cloud to retain this level of accuracy, each individual scan must be aligned with those around it to this same degree of precision.

The problem of aligning point clouds was conventionally approached using ‘targets’. These could be free-standing spheres or chequerboard surface targets. Through overlapping adjacent scans and ensuring they share common targets, scans can be ‘fixed’. By overlaying common targets, multiple scans can be accurately combined to create a complete and precise map.

This is a reliable and robust method for overcoming the issue of point cloud registration. The problem is that it is slow and deceptively complicated. A minimum of three targets are generally required for each pair of scans. An appropriate location for these targets must be selected and targets manually placed. The more complex and dynamic the environment, the more difficult this is to achieve.

What if you could carry out registration without all this placing of targets on site? Dispensing with the need to use ‘registration’ targets was the holy-grail of point cloud generation. The idea behind ‘targetless registration’ was simple: rather than using artificial targets, you could use common natural features to contextually ‘fix’ adjacent scans.

But there was a problem — targetless scans build on each other using the scan data itself, often in aggregate. If the data of any one scan is of poor quality, it can impact the entire model. For targetless registration to work, distortions caused by movement had to be identified and eliminated during processing. For targetless registration to work well, such inaccuracies must be identified automatically without manual intervention.

The missing linchpin for the development of practical targetless registration was automated processing software to remove manual involvement in the registration and alignment process. Machine learning algorithms and a novel use of ‘vector analysis’ have been the catalyst to deliver this change.

Ultimately, what this results in is a faster processing procedure with fewer manual steps. Point cloud creators can now queue scans for hands-off processing, and simply return to them when finished. Through queuing scans for overnight registration, it is now possible to complete many point cloud projects in a single day that would have previously taken a week.

When it comes to laser scanner software, there are many different packages available. You may have already come across Faro Scene, Leica Cyclone, Autodesk ReCap or Vercator from Correvate.  All use different methods and approaches in processing the scanned data. There are some registration packages rolled into end-to-end solutions, providing access to modelling and visualisation tools from the same vendor — a bit like Microsoft and Office.  Conversely, there are tools that focus on each one of these stages individually.

There are basically two main categories: software introduced by laser scanner manufacturers specifically for their own devices, and software built from the ground up to work with many compatible file format outputs. Then there are also several choices based around cloud compatibility and the approach taken to deliver registration.

In the early days of LiDAR scanners, you used to need software that “understood” the scanner. Now, the hardware is much more stable and robust, making hardware agnostic solutions a viable option. This gives you the flexibility to develop solutions tailored specifically to your needs — not the scanner hardware. You will still see registration software provided by most of the major scanner providers, including Faro and Leica (as mentioned above) as well as Riegl, Z&F, Trimble and Topcon.  Each has its own strengths and weaknesses but usually works best with the scanners from the same company.

LiDAR is how laser scanners work

So, that’s LiDAR. Hopefully, we have cleared up the most confusing thing about LiDAR — that it is both a process and technology in one. Often it gets used as a catch-all to describe laser scanners. However, most accurately, LiDAR is the process by which those scanners function. Remember, LiDAR measures the time it takes for a laser to travel to an object and then reflect laser light back to the scanner, and uses that information to gauge distance. We also hope we have explained the other major LiDAR fact to remember: to get the most out of LiDAR, make sure you understand how point clouds are registered.