How LiDAR is changing the world: Construction and city planning to the Amazon and Notre Dame

In this article, we explain what LiDAR is and explore how this mostly unknown technology is transforming processes across the globe.

People outside of land surveyors don’t know much about LiDAR. If it was not for its phonetic similarity to Radar, asking someone about LiDAR would likely yield even blanker stares that it does — not to suggest you will get a lot of recognition today.

In truth, LiDAR has gone through something of a quiet renaissance over the last decade, bringing visibility, transparency and efficiency to a number of different industries and sectors that impact most of our lives on a daily basis.

But, what is LiDAR, what has changed and how could something few understand really be changing the world?

If you have these questions, you have come to the right place because that is exactly what we are going to explain here.

Let’s start with the basics. There is a reason that LiDAR sounds like Radar — they both describe the use of electromagnetic waves to make measurements across distance.

LiDAR stands for light detection and ranging and Radar is radio detection and ranging. Both use time-of-flight measurements to gauge distances. Radar does so with radio waves while LiDAR uses pulse lasers. This is why ‘LiDAR scanners’ are generally called laser scanners. The use of a higher frequency, smaller wavelength signal allows for far greater accuracy and precision in measurements, but with a reduction in measurement distance to achieve that quality.

A LiDAR system (which can be mounted on anything from an aircraft to a simple tripod) fires up to 1 million pulses per second in a sweeping pattern, each point striking the closest line-of-sight object. Light that is reflected back to the scanner is measured and a distance is calculated based on the speed of light.

Each of these points is catalogued and together is processed as a ‘point cloud’ to produce a highly detailed 3D image. For complex or large spaces, multiple LiDAR scans are made and stitched together in an alignment process called registration.

How LiDAR is changing the world

So, LiDAR is the technology behind laser scanners — big deal?

It might sound underwhelming, but the ability to map 3D space in exact detail is immeasurably important and pretty new. If you think about the challenge of doing this by hand, even in a small room, it is overwhelming. It might be simple to get millimetre accuracy on smooth wall dimensions. But even a few light fixtures are going to throw off your ability to create that map quickly — if at all.

We do everything on computers these days. Developing construction projects, fabricating new products, city planning and building maintenance are all done digitally. From planning, through to project delivery, assessment and operation, digital tools aid every aspect of our lives — work and play.

The utility of those digital tools, however, is curtailed if they cannot be overlaid onto real spaces. Particularly when it comes to planning and delivering large, complex projects, that ability to pull the real world into digital space, and the cross-check outputs with planning, is invaluable. Matching digital models with physical space is exactly what LiDAR delivers.

Why is LiDAR important now?

Commercial LiDAR systems have been around since the 1990s, and the technology dates back to the 60s. But it has always been expensive and cumbersome. Where LiDAR has changed in recent years is in cost.

The fact that many scans are required to cover large and complex spaces requires each of those scans to be stitched together with the same level of precision that each possesses individually. This tremendously slows down the process.

Surveyors have developed a number of aids to accomplish this 'registration process', including the use of field targets. None, however, remove manual aspects of point cloud registration, a process that can take longer than capturing the scans and dramatically drives up costs.

The reason that the number of LiDAR applications has ballooned in recent years is a fix to this registration issue. New software solutions that deploy innovative processing have accelerated scan registration by 40%-80%, and removed the need for manual oversight. In many cases, this more than halved the cost of commissioning a survey.

This might be interesting, but to understand how this little software change is actually changing the world, we need to look at some examples.

Construction is where LiDAR has been playing a large industry role the longest. The steep costs, high complexity and low toleration for error have made the historically high cost of commissioning a laser scan worthwhile. Reduced costs have meant an explosion of cost-effective uses.

For construction teams, access to LiDAR delivers the ability to create 3D models of existing space and build digital plans on those real spaces. Then, stages of construction projects can be scanned for quality assurance, cross-checking with models and spotting errors before they become a problem.

LiDAR can also be deployed to quality assess prefabricated materials, making it far simpler to engage in this kind of construction process — driving efficiency, reducing costs and allowing architectural design to be pushed to its limit.

The value of this kind of planning has been elevated by the development of digital collaboration frameworks such as BIM (Building Information Modelling), which delivers the value of these scans to every element of a construction team in formats best suited to their needs. BIM schematics then carry on to provide continuing value to facility maintenance and operation teams.

The value of 3D modelling increases when dealing with existing structures. Without the ability to digitally map what is already there, planning teams are limited in their ability to use modern tools to complete a project. This is true for an extension to your house, all of the way up to delicate restorations of historical sites.

A passion project by art historian, Andrew Tallon, saw the mapping of Notre Dame in exact detail using a Leica laser scanner. These scans were immediately turned to in 2019 after the fire that saw the spire destroyed and much of the structure damaged. Combined with scans of the damaged building, a safe road map to near exact restoration has been created.

The availability of LiDAR mapping technology may save this heritage site from the dustbin of history. It is also reducing the cost of all kinds of restoration projects.

LiDAR used for exploration: Angkor Wat and the Amazon

LiDARs applications go beyond construction to simple discovery. The reason Andrew Tallon was dead set on mapping Notre Dame was to better understand how it was constructed. Those maps revealed structural shortcuts on the west end of the cathedral, columns that don’t line up and areas that were built around existing structure on the site — along with intentionally outward leading columns.

Scans of the Amazon rainforest may be revealing even deeper secrets about unknown civilisations. Historians have generally agreed that the dense Amazon jungle was far too hostile a place to host organised societies, but this might be wrong.

What has been called a “major breakthrough” in Mayan archaeology, more than 60-thousand dwellings have been identified in the Guatemalan jungle using LiDAR — revealing an even more complex pre-Columbian civilisation than was previously understood. We now know that estimates on population scale and density were significantly underestimated.

Similar discoveries have occurred in the Brazilian Amazon rainforest, with 81 never before identified earthworks found using aerial LiDAR scans. With historians now estimating a minimum population of 1 million people supporting these construction efforts, the entire history of the region is being rethought. New excavation projects are being planned to uncover the extent and complexity of the still unknown society that built these earthworks.

LiDAR not only allows us to better understand historical sites and buildings, it lets us better understand the cities in which we currently live. By mapping cities in precise detail, ‘digital twins’ can be constructed that allow analysts to understand how we live, and build infrastructure that will complement and improve those daily habits.

By mapping cities, civil engineers can capture the information-rich power that 3D scans deliver to construction projects, but on a city-wide level. The impact of new buildings, infrastructure developments and changes to service access can be mapped and modelled, and exact replicas of the city produced — even overlaid with real-time human data delivered by IoT devices.

Fundamentally, LiDAR is the bedrock of the smart city of the future, allowing city planners to gain the data they need to deploy algorithmic analysis and find crucial solutions to accommodate ever-expanding urban populations.

Information delivers efficiency and enables decision-making. Improved mapping and modelling capabilities delivered by LiDAR make sustainable choices easier. This ranges over everything we have discussed so far.

LiDAR-informed construction projects are more efficient, especially when using prefabrication. Smart cities can be designed to minimise their environmental impact and maximise the use of resources. Deploying this mapping technology beyond the city to an entire country poses the possibility of delivering this kind of controlled planning on an even larger scale.

LiDAR is also being used to deliver the sustainable management of forests. LiDAR can be used to better understand the forest canopy and terrain, assisting with management, assessing forest health and directing economic activities like logging and farming in areas that will have a limited impact on the long-term and total health of the ecosystem. Over the longer periods of time, LiDAR is being used to map growth cycles and simply better understand the natural world in which we live.

Lastly, LiDAR technology is the driving force behind autonomous vehicles — it is how they see. Although not inexorably tied to electric vehicles, both developments are connected, paving the way to transportation infrastructure that is more efficient and less environmentally damaging.

LiDAR changes how we see the world, and that changes the world

LiDAR delivers detail and precision in digital representations of the world that can be preserved and manipulated. This allows us to better understand the world in which we live and how modifications that we make will impact the systems on which we depend. That could be a single building and its structural integrity, neighbourhoods and the impact of transportation infrastructure, all the way up to the impact of deforestation on a local and wider ecosystem.

Humans rely on visual information to understand the world. By pulling visual representations into digital models, we can deploy our digital tools to assess the world in the same way.

LiDAR is changing the world because it bridges the gap between the digital and physical. This improves our decision-making and increases the efficiency of any complex undertaking. What has changed is a small improvement in software. What it delivers is a whole new way to deploy a technology that is changing the way we see and interact with the world.

It can be hard to identify when a new technological revolution has occurred, or what spark lit that fire. LiDAR and feature-based registration is an interesting example of incremental steps creating a knock-on effect that transforms the information systems we rely on to understand the world. Surveying is undergoing a renaissance and LiDAR is at the heart of that change. 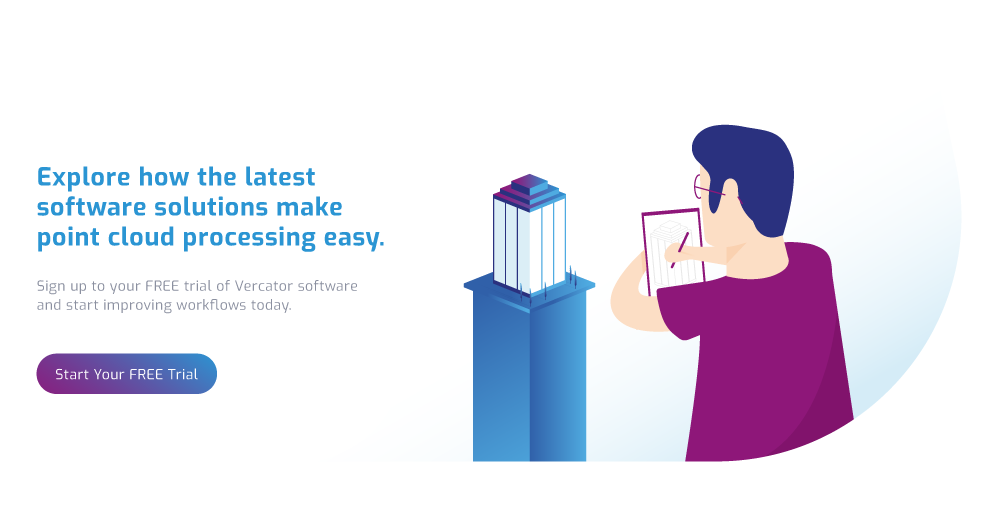 How and Why to Colourise Your Point Cloud