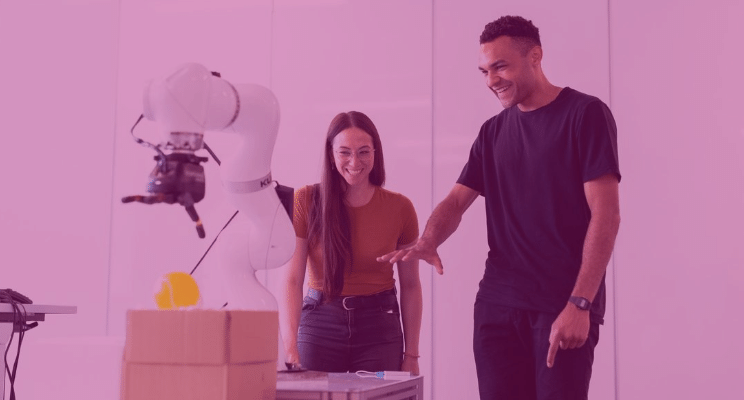 Here, we are going to look at both the advantages and disadvantages of robotics in the construction industry.

Robotic automation has been a big story throughout the 21st century — but it’s also been over-hyped. Although acclaimed as a game-changer, robots have never materialised to fulfil either our utopian or dystopian expectations of AI-driven sci-fi.

Having just addressed whether or not 2020 is the year robots take over the construction industry (it isn’t by the way), we want to take a more measured look at what robots can and cannot do when it comes to construction projects.

Advantages of robotics in construction

It’s noticeable that there are many robotics initiatives, each developing at its own pace. To narrow a vast field we will be considering the following types of automation and robotic technologies:

It is also worth noting that, in most of these cases, LiDAR and point cloud technology are providing the “sense technology”.

1. Helping to solve the skills shortage in construction

Construction is a labour-intensive sector. Automation robotics has proved to be very effective in other industries for reducing labour costs while also improving productivity and quality – so why not construction?

The shortage of skilled labour in construction has been a concern for several years. Using robots can increase productivity and help address this shortage. It will also allow wages to rise for workers with advanced skills. At least during the transition time — which will take a decade or longer — those with advanced skills definitely will be more in demand.

It’s expected that the number of construction jobs will increase rather than shrink, with up to 200 million additional jobs by 2030. Automating more of the construction process will help deliver infrastructure and buildings faster — without needing to reduce headcount. Robots will help minimise skill shortage problems, but will not replace humans, and  will create demand for new types of skilled workers.

Producing individual components, or modules in factories lends itself to more automation compared to what can be done on-site. A substantial shift to modular construction off-site could have a significant impact on building construction, but again the transition will take time.

Some companies, such as Katerra, are already building such modules. The construction in these factories is mostly carried out manually, but over time, as scale increases, the process will become more automated.

Large-scale prefabrication (LSP) approaches are also being considered to combine high-level building components into finished building modules (e.g. bathroom or kitchen modules). This will also benefit from additive manufacturing techniques such as 3D printing, which is already having an impact — generating examples from 2-story municipal buildings to 3D printed bridges.

To ensure accuracy, assessments of a site and its surrounding areas will be needed before, during, and after a construction project. Advances in how point clouds are registered (relating to algorithm improvements and cloud-based registration) have reduced the cost of producing these comprehensive point cloud scans.

Scan-to-BIM and associated point cloud registration will also give the possibility to scan construction sites or prefab materials and cross-reference with plans. This will allow for the quality checking of construction processes,

McKinsey estimates that by 2030, 15 to 20% of new building construction will be modular. It’s a slow take-up, and many activities will remain on-site for some time to come. However, it is a substantial shift and one that will only grow in deployment because of the efficiency and cost-savings it brings to construction.

Automated and robotic systems are being trialled and piloted on construction sites around the world. Tasks such as bricklaying, steel-truss assembly, welding, installation, painting, concrete laying are all being automated with varying degrees of success.

These types of systems are known as single-task construction robots (STCRs), executing a single task in a repetitive manner. A typical example is Hadrian X, a robotic arm used for bricklaying.

The difficulty so far has been getting these single-task robots to work together on a construction site — a very chaotic environment. To standardise the environment somewhat, robotic on-site factories have been put forward as one solution — but it’s still early days and they may bring more problems than they solve.

It’s unlikely that you will fire a bricklayer and bring in a robot to do everything the bricklayer did. It’s more likely machines will take over individual activities within a role. What that means is workers will need to learn to work side by side — or in a hybrid role — with machines. For example, even the average construction worker will end up using a tablet to access building plans or operate a drone in place of doing a physical site walkthrough.

Project managers and supervisors will also have to conduct regular inspections. 3D point cloud models created by construction robotics and drones will help in these new processes, particularly when aligned with BIM-enabled planning.

A safe environment is one of the most critical responsibilities of a construction manager. Aside from the concerns of keeping workers injury-free, there are significant costs associated with an unsafe site. Robots are being looked at as a means of improving safety in some of the more dangerous tasks — for example, demolition.

First developed by the military, the use of exoskeletons has moved from healthcare into the manufacturing and construction industries, and is only set to expand. They can also be a solution to the challenges presented by an ageing construction workforce, enabling older workers to continue working on-site and carrying out physically demanding tasks.

So far, the most visible application of robots in large scale construction projects has been the use of autonomous vehicles and excavators for mining. However, for traditional construction sites, there are still many challenges in the automation of earth-moving machines.

For example, Built Robotics has focused on projects at remote sites far from human construction workers — for example, in street laying. Autonomous heavy equipment prepares the earth for later stages of construction, which is when human crews arrive.

Drones are finding increasing roles in a range of safety applications, from fire and security to inspection. Drones can also track project progress and could eventually play a role in the orchestration of people, equipment, and heavy machinery on a “hybrid” construction site.

While there is potential in the safety aspects of robotics, there are still many challenges to be addressed. Navigation is becoming less of a problem. LiDAR, point clouds, and other reality capture technology are playing an increasing role in creating far more detailed 3D models to guide the robots. But it’s still not a perfect system.

Particularly when paired with BIM, point clouds can deliver valuable and changing site and location information. Such 3D models are vital in bringing robotic technology into touch with the physical space.

Disadvantages of robots in construction

1. Complexity of the construction process

There are reckoned to be around 80 building trades engaged in a construction site. There may be solutions that emerge that are capable of doing the work of these multiple trades, but it looks like construction sites will always be in various stages of change.

Traditionally, it’s tough to make robots work in that kind of unstructured and changing environment. They can’t, as yet, really think for themselves and need detailed plans to be deployed. Some sort of standardisation of sites would be needed to enable robots and people to work together safely.

While individual robotic projects will make a difference, significant productivity gains will only come through systematic change. There are ways to make this happen.

BIM is likely to play a large role in this transition — creating better plans and digitising plans in a way that allows that information to be more easily fed into robotic planning. The use and extension of frameworks such as BIM could lead to the introduction of site-wide automation in any large scale construction project.

Advances in how point clouds are registered (relating to algorithm improvements and cloud-based registration) have reduced the cost of producing comprehensive point cloud scans which would aid this process. You can check out our guide to laser scanning software if you want to learn more.

Vendors can make use of a great deal of robotic technology — sensors, automated point cloud registration, path planning and AI to build a system, but the “sell” has to be around the functionality. Nobody wants to buy a robot; they want to solve a problem. That requires support, education and training.

Robotic technology is evolving, but construction throws up its own unique problems. There are many challenges to be addressed for robots to be used effectively in construction, including:

Pilots and prototypes must be used to weigh the benefits of the various approaches to drive uptake while considering the level of disruption and stress that they create.

Incremental uptake of robotic systems will have to be built into procurement plans. Existing mature technology such as 3D scanning and point cloud registration could be used as a stepping stone for the introduction of robots into the construction site.

Our friend the robot

It’s becoming clear that successful implementation of robotics projects will not depend solely on calculating the amount of time saved and corresponding labour costs. We must understand people’s capacity to absorb the demands of this new world of robot-enabled construction.

Robots and automation aren’t going to replace peoples’ jobs — they will augment their roles and expand project possibilities. By keeping that in mind and proceeding accordingly, great strides can be made in terms of efficiency and effectiveness out outcomes. It’s an exciting time in construction — planning defines the line between success and failure. Get out there and start planning.

How automation and robotics will impact construction in 2021

Is 2020 the year robots take over construction?